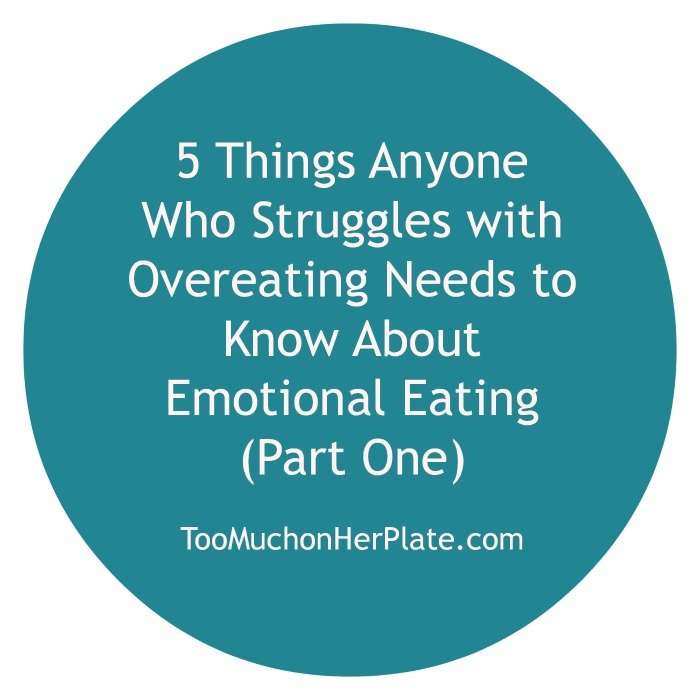 Most people who struggle with weight and overeating have at least a vague idea about emotional eating. Stress eating, comfort eating, and eating when you are bored or frustrated is eating you are supposed to avoid. Unfortunately, this doesn’t get us very far. And even if you know that emotional eating is a problem for you, it may still be affecting your results in ways you aren’t aware of.

Emotional eating can happen “automatically” – you’ll reach for food and even eat it, without really thinking about it. Turning to food to cope with feelings can be such a strong habit, that you act on it reflexively. Sometimes, emotions you aren’t even aware of can be the source of a hunger that doesn’t seem to ever go away and feels out of control.

Bottom line: if you struggle with overeating, feel like you are always hungry, can’t get full, or you can’t stop eating, emotional eating may be a big piece of what’s going on.

In the next few posts I’m going to share five things with you that anyone who struggles with overeating needs to know about emotional eating.

In the meantime, here is Part One of my new series: 5 Things Anyone who Struggles with Overeating Needs to Know about Emotional Eating. I’ll share the next installment in a few days.

The first thing you need to know:

This is especially true if you’ve learned to use eating as a way to avoid feelings. If you associate food with comfort or as a way to get numb or stuff your feelings, your brain will start to make this connection automatically. Over time, you may even stop consciously noticing the feelings or the situations that trigger your hunger.

This was the case for Jane*. She’d have a stressful day at work, and, on the drive home, instead of focusing on the feelings that she had, she’d find herself turning into the drive-thru of the fast-food restaurant she had vowed to stop visiting. She told me it felt like her car was on autopilot. Jane was using food to go numb. When she first started my group coaching program, Jane didn’t feel like she had the strategies or the energy to think about how discouraged, frustrated, and trapped in her job she felt. Instead, she used food to help her avoid what she was feeling. Before being in the program, she didn’t know that she was eating for comfort and to avoid her feelings. Instead, she felt frustrated with herself and confused about why she couldn’t find the motivation to stop overeating and make better food choices.

Using the peace with food approach, Jane was able to design simple ways of responding to her feelings that not only ended her afternoon eating but also helped her feel more in control of her life. In consistent, small, do-able ways, she started to take control of feelings and situations that had been creating both overwhelm and overeating.

Here’s another example of how emotional eating can sabotage your efforts. Marina told me that she had gained weight because she “didn’t have enough discipline.” She had no idea that she was an emotional eater. As we worked together, Marina discovered she was overeating to avoid upsetting other people or feeling upset with people she cared about. She’d sense an argument coming up with your spouse and instead of feeling how ineffective or anxious she felt, she’d end up in the kitchen devouring leftovers. Before she discovered that she was an emotional eater, Marina felt like her eating was simply “out of control” and she felt helpless and frustrated because she couldn’t rein it in. As she took action and got clear on the reasons food had so much power in her life, her feelings of helplessness disappeared and she was able to start taking the steps to create peace with food.

In my program, I’m able to go into much more detail about how to stop blaming yourself and start being effective with emotional eating and overeating. In the meantime, here’s an action step you can take right now:

If you know you don’t need food, but you can’t stop eating, pay attention to what you feel.

*names have been changed by request.