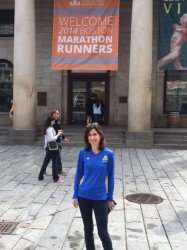 I’m sharing this personal post because many of you asked about my experience running the Boston Marathon this year. I am so thankful to all who sent kind notes, good wishes, and waves of support. I felt them all! By the way, to those of you who think that running a race is simply beyond you, know that I was right there with you just a few years ago. We are ALL capable of so much more than we think. – Melissa

As I sit down to write this, I realize that one week ago at this time, I was standing at the starting line waiting to run the 2014 Boston Marathon.

The air was crackling with adrenaline (not an exaggeration). A recording of a song called “Boston Strong” played and they announced that the singer was there with us, at the starting line, preparing to run. It was supposed to be a very sunny, warm day and I remember thinking that the sun was already hot and I wished I had put on a third layer of sunscreen. I was teary, remembering the events of last year, and I thought about why I had come back and what I wanted to accomplish this day.

I came back both to remember and to move on. I came back to be a part of the resilience of Boston that has impressed me since the two bombs went off on April 15, 2013, killing three people and injuring 264 others. I came back to run and smile and celebrate after I crossed the finish line.

Last year, just after I crossed that finish line, as the volunteer started to place the medal over my head, the first of two bombs went off. I spent the next few hours trying to find my friends and determine that they were safe, trying to get out of a crowded finish area, and trying to find my way back to a hotel, which I didn’t know the directions to, on foot. This year was going to be different. And this year, I was going to celebrate along with the city of Boston and all these other runners.

After being there when the bombs went off last year, one of the things I turned to was a regular meditation practice. I credit the time I’ve spent on this to being more grounded, more present, and more purposeful. Aside from actually running, it was the best marathon training I could have done this year. I listened to one of my meditation audios on the bus ride to the starting line and I think it kept me from being a bundle of nerves.

What can I tell you about the 2014 Boston Marathon? Well, it was nothing short of amazing. From the moment I got on a plane to Boston, people were cheering the marathoners (the flight attendants had literally decorated our plane), shedding tears for last years’ victims, and creating a sense of spirit and community that I can’t begin to describe. Knitters from all over the country made 10,000 scarves in the Boston Marathon colors and handed them out to runners who were visiting the finish line and the site of the bombing before the race. Scarves were everywhere. A woman on the street gave me a “prayer bear” and said that someone in Texas had made it for me. “Every stitch is a prayer for you.” Wow.

The gun went off, the race started, and I began to run. Wow. Last year there were a lot of spectators. This year there were at least twice as many. Ninety percent of them seemed to be wearing Boston Strong T-shirts. And the energy, the spirit they brought with them, was something I have never experienced in my life. Again, I can’t even begin to describe it but it gives me goosebumps just remembering. Yes, this was a marathon I was running. And it was so much more.

I ran. It’s not an easy thing to run 26.2 miles, and it did turn out to be very sunny and very warm. I dumped cups of ice water over my head to stay cool and I ran. And I had a thought I have never had running a marathon before.

This is going too fast!

The miles were passing and I was getting closer and closer to Boston (the race begins in a town 26.2 miles away).

As we entered Boston, the crowds got even thicker and louder. At about mile 23, I was tired and I caught the eye of someone rooting us on and decided I’m going to let the crowds move me forward.

It worked! They did.

And then I was at the sign that said “a mile to go” and then I was turning the corner onto Boylston Street where I knew I would see my husband cheering and the finish line, and the street where the awfulness was not going to happen this year.

And I wanted to be done running and I didn’t want it to be over, and I was so very happy to be there.

When I ran across the finish line the announcer called out my name (not to be expected at the Boston Marathon). And as I finished, a volunteer with a megaphone called “Welcome back to Boston!”