My marathon adventure—the good, the great, and how I almost got stuck in my own stuff

So many of you have contacted me to ask about how my marathon adventure went. I wasn’t sure what to share from this phenomenal day—it was simply so BIG. I could have written a post about all the great memories I have, but I decided to share something more personal. I’m a pretty private person, but something happened on the course that I think is important—because it’s a part of life that doesn’t really get shared amongst high-achievers. So here it is—the good, the great, and how I almost got stuck in my own stuff. 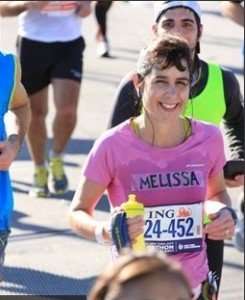 On November 6, 2011, I crossed the starting line of my fourth marathon—my dream race—the New York City Marathon. It’s something I’ve wanted to do for years. Although I’ve run 26.2 miles before, I’ve never run a race like this. There IS no other race like this. The experience of running with 47,000 other people in the largest marathon in the world is simply beyond words.The start alone involved helicopters full of photographers circling overhead and fireboats in the water below as a cannon went off, someone belted out, “New York, New York,” and we took off over the longest suspension bridge in the world—the Verrazano-Narrows Bridge, spanning from Staten Island to Brooklyn.
The weather was perfect and the crowds—and their enthusiasm—were amazing. My sister and brother-in law, my parents, and my two nephews were out on the course to support me and cheer me on. I had set two goals—to run well and push myself, and to have a great time and soak it all in. I felt ready. Brooklyn was alive with energy and I felt like I was flying when I passed my family for the first time at mile eight.
Life doesn’t always go as planned.
As it turns out, it wasn’t going to be my best race, running-wise. I’m not sure why, maybe because I was fighting off a cold, but my body just wasn’t going to do what I’d hoped. That became clear at about the halfway point (13.1 miles) when running started feeling harder than it should have. I trained well for this race, and as I saw my pace slipping, and my goal time disappearing, I started to feel frustrated with myself and how things were going. I had run stronger than this all season long, but today, it just wasn’t happening. Then I got a side stitch that I could not run through. That has NEVER happened before. And as it got worse, I had to walk.. #$%@S!!!!
When you have big goals (or long distances to run), the head game can get you.
At this point, my unhelpful inner critics and I held a little silent conference. My inner perfectionist was mad. She wanted to pack up her running shoes and go home. She wanted to just be done. After all this training, why couldn’t I just do what I knew I could do on a different day? I was walking and hordes of runners were easily moving past me. I wanted to do what I had hoped to do—run fast and smooth. But I couldn’t.
I’m embarrassed to share this because it sounds petty.
My goodness, I was running 26.2 miles. It’s a big deal and a major accomplishment—I know that, and here I was picking apart how fast I was doing it. But I’m sharing this because I know that many of us do this all the time in our own lives. We focus on what we aren’t doing and fail to see the enormity of our accomplishments. We can be harder on ourselves than we are on anyone else. And we miss the joy and the wonder and the amazingness of what we do and are and are capable of. I write about this stuff, I coach women through it, and here I was in the middle of my dream day, doing it to me!
Thank goodness, my Inner Champion was along for the ride run.
I drank some water, took a deep breath (which helps with side stitches too by the way), and saw the big picture. I was in the midst of one of the most amazing experiences of my life—one that was no less amazing because I was not running as fast as I had hoped. And just like life, the clock wasn’t going to stop because it wasn’t going perfectly. Life keeps happening. My mindset for the next half of the race was going to determine everything about this day. And in the few seconds that it took to stop being frustrated with myself I knew the truth. I was doing my best and my best is enough. My life was happening IN THIS MOMENT and I could spend it wishing for something different or I could have a great time. Oh, and by the way, I was doing something that I was enormously excited about—running the New York City Marathon!
I made my choice.
I had an amazing race—dare I say, I had an amazing time (pun intended).  I ran—slower—but I ran. I had my first name on my shirt and I HEARD the crowds calling my name and I felt their support and their enthusiasm. I ran toward my family who I knew was waiting at mile 23. A woman yelled, “I’m so proud of you Melissa!” I thanked her and wanted to cry because it was so heartfelt. In the final stretch, as we moved through Central Park, it felt like the crowds wanted us to finish as much as we did. I’ve never felt anything like it. As I approached the finish line, another stranger called, “You’ve got this Melissa—you are strong girl!” and I knew I did and I was. I’ve never said, “Thank you” so many times during a race.

I don’t know that I’ve ever been so happy to cross a finish line, and when the volunteer handed me my medal, I was so proud. I made my dream happen. I ran the streets of New York City. I did my best and I earned this medal. I will remember this day forever—and it was a very good day.
Thanks to all of you who sent good wishes and support. I felt it. Oh, and by the way, for all of you who are wondering, I chosethe paisley running skirt. Turns out, it was just right :-).
Take good care,