How to keep perfectionism from triggering emotional eating 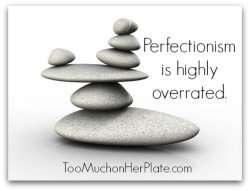 People worry about stress eating or eating because you are bored. People know that they go out with friends and ruin their weight loss plans on a basket of tortilla chips and a few margaritas, but when the word perfectionism comes up, many women smile, nod, and say, “I can relate” without giving a second thought to how perfectionism may be sabotaging their goal to weigh less or take control of emotional eating.

In our culture, perfectionism is often something to be (almost) proud of. It can mistakenly be associated with having high standards or aiming for quality results. Unfortunately, perfectionism actually limits success, and it’s a major cause of emotional eating and overeating. Perfectionism (also called all or nothing thinking) can sabotage your efforts to change your eating and will actually undermine your progress.

It would be fascinating if we could accurately measure the number of extra calories a dieter takes in after that moment when she decides that “it’s no use, I’ve blown it!” Perfectionism is the belief that if it isn’t perfect (one hundred percent, exactly up to expectations, no mistakes or slip ups), you’ve failed or it’s no good.

With eating, this tends to show up like this: you eat “perfectly” all day (adhere to a strict food plan that is often too restrictive) and then fall off track at the end of the day. A perfectionist sees the misstep as “blowing it” and the day as a failure. She gets frustrated by her “lack of willpower” and often continues past that initial misstep to overeat or make more poor choices because “it didn’t work” “the day is ruined” and now she “has to start all over again.”

Much of the time, the calories eaten after deciding that imperfect equals failure are often more than the misstep that led you to believe you failed.

Perfectionism leads to thinking that it’s all either good or bad, a success or a failure. When you focus on only one of two results, the large gray area in the middle is overlooked. The problem is that this area in between is the place for making peace with food and ending emotional eating.

When you overeat, avoid seeing it as a failure. Instead, examine why it happened.

“Why did the food seem so compelling even though I wasn’t hungry?”

“How come today was so much harder than yesterday?”

“What did I do that was working and where did things fall off track?”

These questions allow you to learn from experiences and make adjustments so that you can continue forward toward your goals.

Perfectionists don’t tend to learn or grow from mistakes. Instead, they see them as failures and may even feel like failures because they made one. Starting over and “banishing” the mistake can become more important than using it to move forward.

When you get stuck in perfectionist thinking, a mistake “ruins” everything.  It’s as if by eating that piece of cake, you slide all the way back to start and all your earlier efforts and great choices that day have evaporated or count for nothing.

Perfectionist thinking is a recipe for never feeling good enough. Why? Because nobody is perfect. Even if you attain your impossible standards for a short period of time, eventually, you’ll miss the mark. With perfectionism that means quickly switching from doing great to having failed.

Perfectionists focus on the distance between where they are and what they define as perfect. Within this mindset, it’s easy to see all the flaws but almost impossible to take credit for the (imperfect) progress, good choices, and effort you are making. If it isn’t perfect, it just isn’t good enough because you haven’t succeeded yet.

A perfectionist mindset, never feeling good enough, and not seeing the progress that you are making, is a powerful trigger for overeating. Eating for comfort, eating to avoid your thoughts, or eating out of frustration or guilt or shame can all be triggered by a perfectionistic mindset.

How to Keep Perfectionism from Sabotaging Your Eating

First, don’t get all perfectionistic about it! Expect this to be a journey of trial and error. As a recovering perfectionist, it’s best to keep it simple, so start with these three steps:

What tricks and tips have you found to recognize and address perfectionism in your own life? How and where does it tend to trip you up? I’d love to hear. Leave a comment below and share your thoughts.