Are you overeating because you’re focusing on the wrong habit? 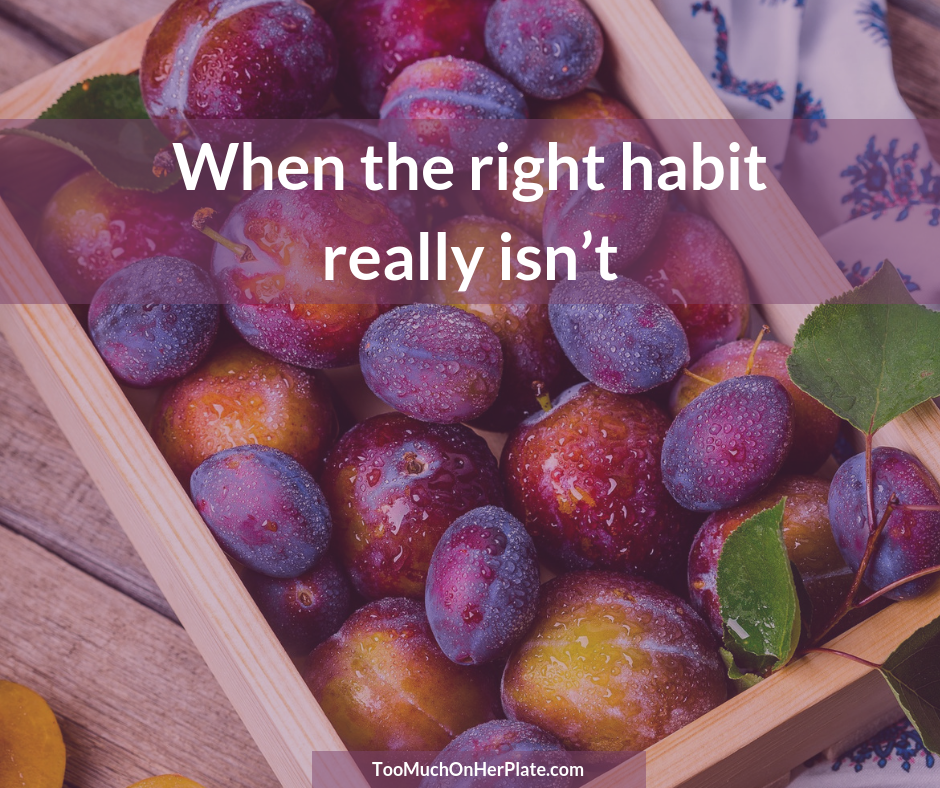 Sometimes we think we’re doing everything right. We work really hard, don’t get the results we want, and feel like we want to scream with frustration. A lot of the time, it’s because we’ve picked the wrong habits to nurture – or more accurately, we’re ignoring the habits that are the building blocks of lasting success with overeating.

Lisa* (not her real name) was exceptionally vehement when she described her eating habits to me. She’s been around the block a few times and knows exactly what patterns of eating work best for her – when she can stick to her plan. She described in detail how she focuses on eating fresh vegetables and quality protein, how she doesn’t believe in snacking, and the way she preps food on the weekend and keeps her refrigerator stocked with just the right food. She told me how much she likes this way of eating, what a great fit it is for her, and the results she sees with this approach. She says she’s really happy with the systems and habits she’s developed that work for her.

But she keeps losing her grasp on these amazing systems and habits.

As confident and sure as she sounds, she’s also working on losing the same 25 pounds that seem to always be a struggle, and she’s frustrated that it feels like she works so hard while never arriving at her goal. Lisa’s put together a solid set of habits around food, but staying the path just isn’t happening.

Why am I sharing this with you? Because as Lisa and I dug deeper, it became clear that she’s caught in a trap that so many smart, ambitious women get stuck in with overeating. She’s focusing too much of her energy on the wrong habits and is missing the source of her real power.

When Lisa and I examined things, I discovered something pretty common. Lisa often has two habits or desires that are fighting each other. One is the “healthy” habit that she tells herself she “needs” to do, but the other is the old, comfortable habit (sometimes a belief) that undermines just about every action she tries to take. This means that whenever she pushes herself to do the “healthy” thing, she has to fight an urge that she is missing out, depriving herself, or making a hard choice. Making things even harder, Lisa puts all her energy into her healthy eating habits and is ignoring the old patterns, trying to power through them and hoping they will go away.

Here are some examples we uncovered. For each, I’ll share with you the “healthy habit” that Lisa thought she had, and the other, “overeating habit” that was operating in the background unless she was super disciplined and focused.

Healthy habit: I eat when I’m hungry and stop when I’m full.

Overeating habit: I clean my plate. If I’m eating out, the restaurant gets to choose my portion and I get to eat whatever they bring. It feels great to get to eat everything. (It doesn’t. When Lisa eats this way she often feels over-stuffed, sleeps poorly, and feels bloated the next day.) It’s a sacrifice to leave food on my plate. If I do this, I miss out.

Healthy habit: I feel most energized and vital when I eat fresh vegetables and get enough protein and water each day.

Overeating habit: I treat myself when I’ve earned it by not “following the rules.” Sometimes I get to eat whatever I “want.” What I really want to eat is not food that is good for me.

Note – this is a story that trips up so many women! Lisa’s untrue story is that life is better when she gets to eat whatever, whenever, and in abundance. Her (untrue) story is that FREEDOM equals overeating. Here’s where things get interesting – the truth is that overeating doesn’t feel like freedom for Lisa; it feels like a trap. And on those days when Lisa gives in to her old story and eats “whatever she wants” she usually feels tired and crappy and not at her best.

There’s another old overeating habit or story here as well. It’s that eating “healthy” isn’t enjoyable and that the real fun starts when you go off track.

What’s interesting is that Lisa is like a lot of my clients. She actually loves the big flavorful salads that she makes. She loves the energy that she has when she eats in the way that fits her (not overeating), and she feels free when she’s in the groove with her healthy eating plan and not feeling like she’s constantly thinking about food or feeling frustrated with her choices.

Eating healthy food and not overeating wasn’t as easy as it could be for Lisa.

In addition to conflicting habits, we found missing habits that were making things a whole lot harder for Lisa. Her plan is to use food only as fuel. The problem is, Lisa really loves tasty food. Her habit didn’t take into account the flavor, texture, and enjoyment she wants and needs in her life. Without taking this into consideration, she may always feel deprived when she eats her “healthy” menu.

When we looked at the times that are most difficult for Lisa, they followed a pattern.

She gets off track when she’s on vacation, or when she’s extra busy with work. You guessed it, Lisa tends to tell herself those are “free days” (even though they are fairly regular parts of her schedule). She doesn’t have habits she loves that fit these routine parts of her life.

Lisa tends to overeat in the evening, after a long, sometimes stressful day. When I asked her what habit she wished she had instead, she said what I hear all the time: “I want the habit of not doing it.”

Not doing something is NOT a habit

Replacement habits – habits you put in place that replace overeating – are almost always a key piece of success.

Lisa has been doing what most busy women do. She’s been trying to stop her established patterns of overeating by focusing on what to eat and what portion size she’s “allowed” to have. At the time we had this conversation, she didn’t have working habits that helped her deal with the triggers for her comfort eating, stress eating, and mindless eating. She was simply trying to manage the food and not stress eat, comfort eat, or eat mindlessly.

When you are feeling triggered to overeat by something that isn’t hunger, focusing on portion size is just going to feel like you’re not giving yourself ENOUGH. When you develop new habits to target the trigger directly, the craving and hunger decreases or goes away. Problem solved.

What works: building habits that fit you and that work so well they become habit-forming.

When new habits with food only feel like hard work, every new, “healthy” step you plan to take is going to require discipline and focused attention to make it happen. Think about when you typically overeat or when your plans tend to fall apart. I’m betting it’s not when you’re feeling at your most focused, refreshed, disciplined best.

Let’s talk about how to do it differently.

Habits become habit-forming when they work for you

This may sound like a no-brainer, but when it comes to overeating, too many smart women are trying to stick to habits that simply feel like hard work. They don’t have enough habits that make food, and overeating less powerful.

Lisa has plenty of items on her healthy eating to-do list. What she really needs are habits that work for her, and do this so well that she forms the habit of keeping the habit.

Lisa needs habits that help her catch herself when she’s falling into old ways of thinking (like the story that overeating feels great).

She needs some new habits for taking care of herself when she’s tired or discouraged that don’t involve chocolate.

She needs habits that help her avoid those old ways of thinking that sabotage her.

She needs great habits for ordering in restaurants, when she is busy, or when she’s traveling.

She needs habits that actually help her with triggers like stress, boredom, and difficult emotions – and do the job better than her old overeating habit.

Habits that really become habits are developed and strengthened one step at a time.

Habits that support you in freedom from overeating often don’t even involve food – they address the reason you overeat.

Habits become habit-forming through trial and error and discovering how to fit the habit to you – instead of working really hard to adopt a habit that doesn’t really fit.

Habits become your habits over time, with practice, and with gentle reminders to keep returning to them.

Lisa may very well be close to identifying the right way of eating for her, but food alone doesn’t break habits with overeating. Lisa still needs the habits that take her power back from food and help her create a life where she doesn’t want to overeat, and she needs those habits to become automatic and comfortable so she can stop starting over and stop struggling with the same 25 pounds.