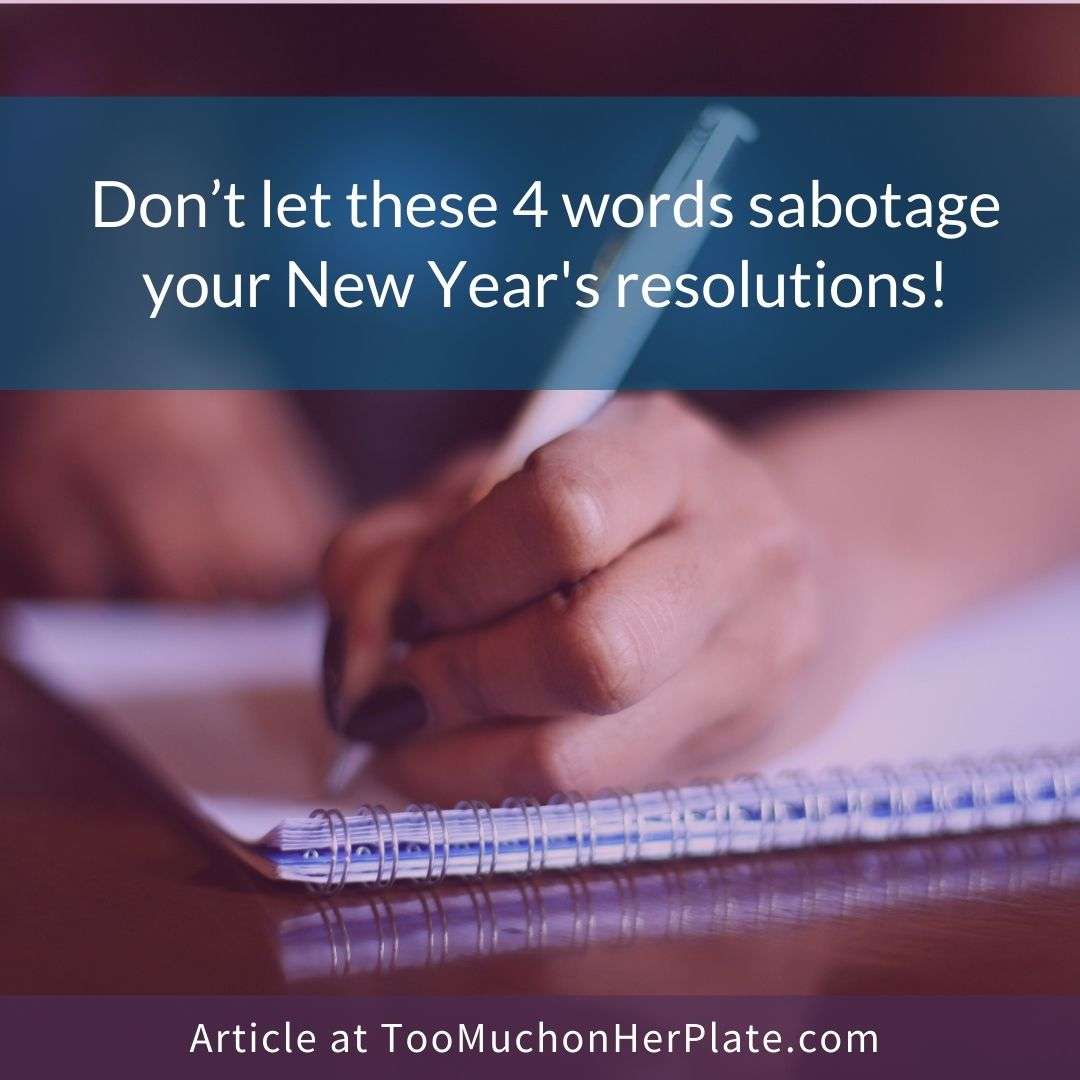 I know this is a week when many of us are thinking about goals, resolutions, or plans for the months ahead. Getting healthy, losing weight, taking better care of ourselves and creating better life balance are hot topics. Before you dive in, can I offer some food for thought? I’ve noticed a pattern worth paying attention to. It involves four small words that can get me stuck all-too-easily and that trip up some of the smartest and savviest women I know—over and over again.

The four words I’m talking about are “it won’t be enough.”

This seductive phrase tends to pop up (especially for high-achievers) when we get serious about making changes, starting a new habit, taking on a new challenge, or stretching beyond our comfort zone.

“It won’t be enough” can be especially pesky when we start setting goals, creating New Year’s resolutions, or trying to achieve something that we really want. Here’s how it works. Say you want to improve your fitness and lose 50 pounds like a private coaching client I started working with recently. She’d been haunted by “it won’t be enough” for years.

Every time she decided to get serious about making changes, the little voice in her head told her, “It won’t be enough.”

The steps she could envision taking “wouldn’t make a difference.” She’d “never” lose all the weight, and any successes would just create a teeny, tiny dent. Her efforts to go to the gym “weren’t enough.” She believed she needed to do more. It required a big mental push to move forward with what she felt she had to do. Just thinking about making the big changes she told herself she needed to make left her feeling stressed and tired and time-crunched.

However, being the successful, high-achieving professional that she was, she periodically pushed herself to carve out ambitious plans to make BIG changes. Plans that took lots of time and energy and meal planning and that left her hungry and miserable and feeling deprived. She resolved to go to the gym six days a week and do cardio and weights and take classes. She bought vegetables and green drinks (that she didn’t like) and read lots of books.

Each time, she screwed up her willpower and told herself this time she would be successful. And every time, her willpower “failed”. She couldn’t make the time to prepare the healthy foods she was expected to eat. Her trips to the gym left her so sore she couldn’t make herself go back (or they overwhelmed her so much that she never made it in the first place).

By the time we met, this client had had years of feeling like she’d endlessly failed at her plans. She felt ineffective, frustrated with herself, and pretty hopeless.

“It won’t be enough” easily leads to taking on too much. And when we do this, we can’t keep up, we can’t find the time, we end up feeling stressed out and overwhelmed, and most importantly, we end up stuck.

Here’s some truth about change. Small changes create big changes. In fact, small changes are the easiest ways to create habits and make health or self-care or life balance a part of your lifestyle. Positive actions reverberate—taking one step makes it easier to take the next. Most importantly, keeping it do-able allows us to keep doing it. Yes, I know, this sounds like a no-brainer, but you might be surprised how often we tend to tell ourselves the “do-able” solution just won’t make a difference.

The truth is, a do-able step is a step that I will actually keep taking. Believing that it doesn’t count unless I do something bigger keeps me from taking any action at all.

“It won’t be enough” not only leads to goals and plans that are overwhelming; it also leads to procrastination, or complete and total stuckness.

You might be stuck because of a belief that “it won’t be enough” if you find yourself thinking:

“I just don’t have enough time.”

“Nothing I do will even make a dent in what I have to accomplish.”

“It really is an all-or-nothing situation and I’m not ready to commit.”

“It won’t be enough” is so powerful that I’ve learned to look for it every time I feel stuck in an area of my life.

The solution to “it won’t be enough” is pretty simple if you are willing to try it. Stop worrying about enough and choose something that you can do. Take a step, any step, that you can fit into your life. Once you’ve mastered one step, take the next one.

The client I described earlier is embracing do-able and is finding that small changes do have an impact—a pretty big one. She’s seeing results with more ease than she ever imagined.  Her motivation and her energy for sticking with her plan are at an all-time high. It might be worth it to take a look at your current goals or resolutions. Are you moving ahead confidently at a pace you can see yourself continuing? Are you already feeling tired or overwhelmed or are you wondering how you are ever going to keep this up?

“It won’t be enough” too easily leads to too much, to burn out, and to getting nowhere. My two cents? This time, try something different.